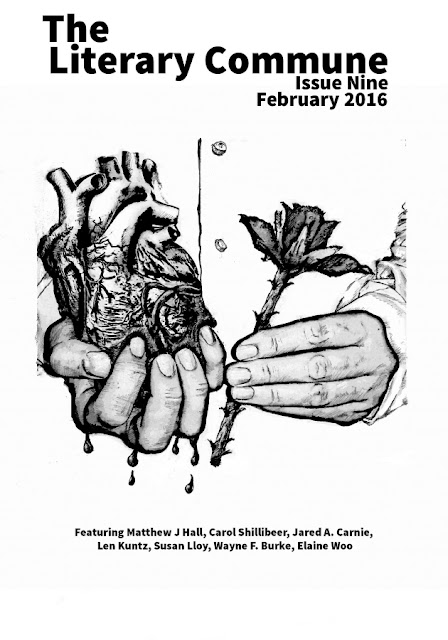 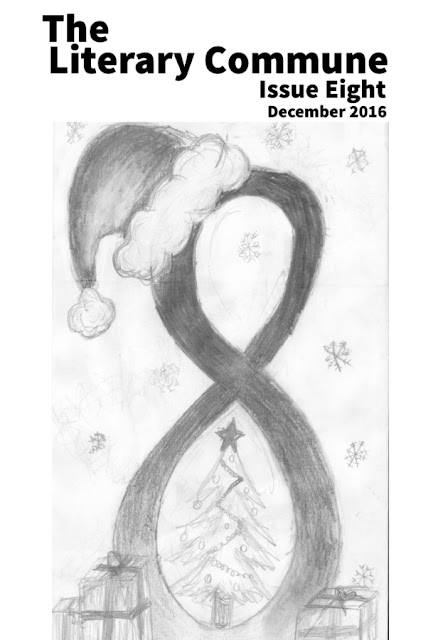 Fathers For Jaundice by Mark Piggott
Bulldog by Nick Larter
Dried Fruits by Jennifer Dane Clements
Talisker by Neil Campbell
The Jump by Jared A. Carnie
Lamp by Jared A. Carnie
Mr Ginsberg by John Kojak
A Guy Walks Into a Bar by John Kojak
And then he’ll surely ask you for a favor by Lance Nizami
Location, Location, Location by Lance Nizami
Question for a Writer by Lance Nizami
Deconstructing The Poem by L.G. Corey
Snoop by Wayne Burke
Any More Questions? by Wayne Burke
Charles Darwin by Martin Shaw
I Am Mafia, And Dealer in Second-hand Fishing Rods in Poem by Martin Shaw
They Buggered Me Stupid by Martin Shaw
Playing War by Michael B. Tager
Pedro Gutierrez’s True War Story by Joseph JP Johnson
Fourtold Chapter 8 by Ray Hyland
Posted by Unknown at 04:31 No comments:

We like to ensure that our subscribers get hold of paper copies of each of our issues, because that's part of the ethos of our 'zine. However, we're also aware that non-subscribers may want to read some of our older issues. This might also be an opportunity for people considering submitting their work to us to take a look at the kind of things we like to publish.

You can find PDFs of older issues on our "Back Issues - PDFs" page in the menu on the right hand side.
Posted by Unknown at 11:02 No comments: 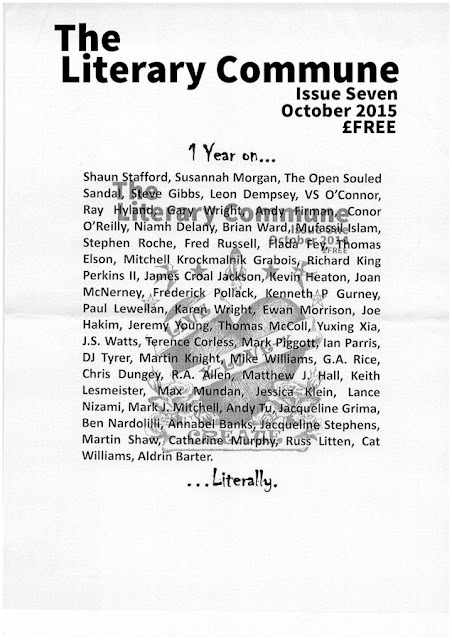 Why I Want To Fuck David Cameron by G.A. Rice
The Great Fragmenting by Ewan Morrison
Norfolk and Broads by Mark Piggott
Swastika Boy by Ben Nardolilli
Media and Personal Interests by Ben Nardolilli
Better in the Flesh by Annabel Banks
Outsider by Annabel Banks
Emergency Surgery by Annabel Banks
And His Mouth Is Most Sweet by Jacqueline Stephens
Plastic by Jacqueline Stephens
My Mother Tells Me Of Her Near Death Experience by Jacqueline Stephens
The 7-Day Drug Addict Exercise and Weight Loss Program by Max Mundan
Thundering Down The Isles by Martin Shaw
I Hate Myself and Long For Death by Matthew J. Hall
Bulldog by Catherine Murphy
Sea Front by Joe Hakim
Democracy: a Poem by Anon
A48935CB by Russ Litten
Fourtold Chapter 7 by Ray Hyland
Posted by Unknown at 15:33 No comments:


Well, here at TLC towers, we are all very proud of Issue 6 and the quality of the brilliantly edgy prose and poetry inside. Many thanks to our contributors for their support and patience (very late, we know!). Without you, The Literary Commune would not exist. Submissions for Issue 7, our anniversary issue, are now open and close on 18th September. As mentioned before, much as we love the submissions we regularly receive from our USA contributors, we would love to read more work from British writers. Get sending!

If you are a fan of the often quite quirky pieces we like to publish in TLC, then I would like to introduce you all to a fantastic book I have recently had the pleasure of reading. Einstein’s Beach House is a fascinating collection of short stories written and put together by renowned and often controversial US writer, physician, lawyer and licensed New York City tour guide, Jacob M Appel.

Einstein’s Beach House, named after one of the stories therein, is a straightforward and highly readable, yet, at the same time, richly complex and extremely clever collection of shorts that stayed with me long after I finished reading. The book’s intense mix of edgy modernity, magical realism, humour and, often, sadness is a prime example of why the short story form should never again be seen as the novel’s poor cousin.

In ‘Paracosmos’, we meet Leslie and Hugh, worried when their daughter, Evie, socially isolated by her unconventional, scientist father, adopts an invisible friend. Determined to persuade their daughter away from her fantasy, the couple soon find themselves drawn into Evie’s world, a whole fantasy family soon becoming a source of escapism for all of them. In ‘Sharing the Hostage’, a 42-year-old enjoying the first stages of a new relationship finds himself involved in a battle between his girlfriend, Maddie, and her ex as they fight over custody of Fred. The twist? Fred is a tortoise, loved and agonised over by his parents as much as any child might be. And, in the heart-breaking ‘The Rod of Asclepius’, 6-year-old Lauren grows up with a father determined to get revenge on the medical team who caused his wife’s death.

My favourite story in the collection, however, has to be ‘La Tristesse des Herissons’ in which we meet a young couple, both emerging from fragmented backgrounds, as they attempt to create the ideal family on which they have both missed out. He wants a dog, she wants a baby, so, in the end, they compromise, adopting a hedgehog whose subsequent battle with depression soon causes substantial cracks to appear in the foundations of this unusual family set-up.

If Raymond Carver and Isabelle Allende had a child, Jacob M Appel could be it. Throw in Franz Kafka, Chekhov and Gabriel Garcia Marquez as influential role models and Einstein’s Beach House is the result. This collection contains the kind of stories that will have most writers thinking 'I wish I could write like this' and, as a writer myself, I will definitely be exploring Appel’s work further. Einstein’s Beach House is available now from Amazon and other stockists. If you love short stories or simply want to improve your own writing, buy it. You won’t regret it.

Posted by Jacqui Grima at 04:18 No comments: 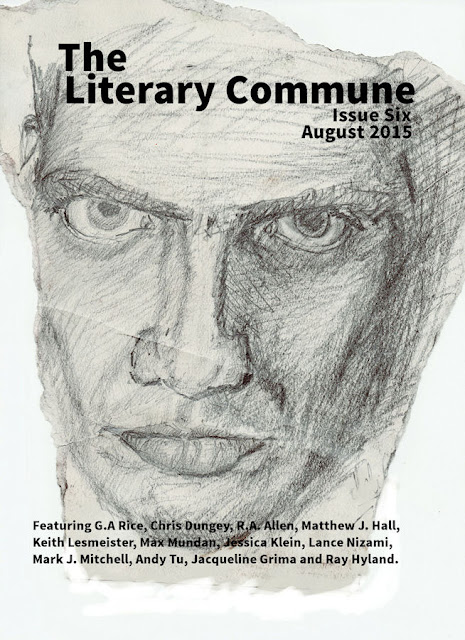 A Close Shave for Margaret Thatcher by G.A. Rice
With Relish by Chris Dungey
Gate Money by R.A. Allen
The Fantasy I Should Not Speak Of by Matthew J. Hall
What It Looks Like by Keith Lesmeister
I Can’t Be Held Accountable For the Fucked Up Shit You Do In Your Dreams by Max Mundan
A Horrible Truth by Jessica Klein
Clean by Jessica Klein
Next by Lance Nizami
Cowboys by Lance Nizami
Re: Drinking by Lance Nizami
Elixir by Mark J. Mitchell
Two-Part Invention by Mark J. Mitchell
Angels, Monsters, Superheroes by Andy Tu
Lucky by Jacqueline Grima
Fourtold Chapter 6 by Ray Hyland

Issue 6 Coming Soon! In the Meantime...


With submissions for this period now closed, we have some fantastic short stories and poems to look at this week in anticipation of the release of Issue 6 on 1st August. Some really edgy and very clever stuff submitted this time and this issue is going to be a great read. What we did notice, however, was that, after the success of our ‘Brit Lit’ issue, there was a distinct lack this month of submissions from this side of the Atlantic. More submissions from Brits please!

In the meantime, to keep your writer’s brains occupied in between issues of TLC, we have decided to do some book reviews right here on the blog and we have already got some great reads lined up to recommend!

This week, our friends at Orenda Books will be releasing the Kindle version of the fantastic and beautifully-written How to be Brave, the debut novel of UK-based author and previous winner of the Glass Woman Prize, Louise Beech. Shortlisted for the 2014 Luke Bitmead Bursary, How to be Brave tells the story of Natalie who turns to the magical power of storytelling when her daughter Rose is diagnosed with life-threatening Type-1 diabetes.

Feeling desperate and helpless when Rose pushes her away, Natalie attempts to reach out to her daughter by telling her the story of her grandfather, Colin, who survived 50 days on a lifeboat after his merchant navy ship was bombed in the Second World War. Using her grandfather’s diary as a guide, Natalie immerses herself and her daughter in Colin’s world, the ghostly visions she has of a man in a brown suit becoming more and more real to her as the story progresses. Is Colin helping Natalie and Rose through their time of crisis from beyond the grave?

The Kindle version of How to be Brave is available on Amazon from this Thursday, 30th July and the paperback version will be released in September. Follow Louise Beech on Twitter @Louisewriter.


Next time, I will be looking at a fantastic collection of short stories from one of our friends in the US. Watch this space for more details!

Posted by Jacqui Grima at 04:13 No comments: